Floods in France as storms wreak havoc across the country

In January 2018, a series of storms wreaked havoc across France resulting in floods and disruptions in urban and rural areas, including coastal regions. Travelers had to adjust their plans relying on weather forecast and recommendations of risk management specialists. Weeks of rainfall produced a relentless rise in the water level, and on 29 January, the flood level of the Seine River in Paris rose to 5.84m whereas the river typically flows at a level of 1.5m through the capital.

The last significant flood in Paris occurred in June of 2016. The Seine River floodwater reached a high of 6.1m, some public transport lines were closed or limited, and around 20,000 people in Paris were suffering from power outages. Therefore, people were more alarmed in January watching the water rise and worrying if it will get as high as the flood in 2016. Luckily, it did not. The disruptions were, however, still significant as the disaster stroke not only the capital region. 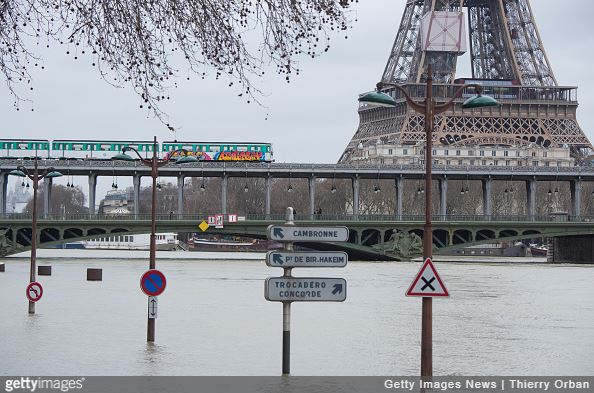 It was Storm Eleanor that hit the country first. The storm left nearly 200,000 homes without power and several people injured. Trees were blown over leaving many roads blocked and causing suspension at the regional Transport Express Régional (TER) trains. About 49 departments, mostly in the north and east of the country, were on orange alert, the third most severe alert on its four-tiered system, due to winds of up to 147km/h. Almost all coastal departments in the west and the north were on alert for coastal flooding caused by huge waves.

Bad weather conditions affected the country through January, and as water levels in the Seine River were continually rising, low-lying areas near the Seine were in particular risk of flooding. After several weeks of record rainfall, rivers had flowed over their banks and nearly half the country was on flood alert. Heavy rains brought disruption to the east-central region of France. On 22 January, the Seine River in Paris was already at elevated levels, and some riverways and crossings were temporarily closed. Furthermore, the rising of the water level in the Seine and Marne rivers led to serious traffic and public transportation disruptions in Paris. For instance, the Regional Express Network (RER) C suburban rail line remained closed for almost two weeks. The public was advised to be watchful of cellars and basements and to stay away from the water’s edge. Around 1,500 people were evacuated from their homes in the greater Paris region. The world-famous museum The Louvre closed its first floor in order to evacuate artworks, and other museums were ready with emergency flood plans. The Seine River in Paris steadily fell only after 29 January.

Incident reporting with the SAFEY app

During this period, SAFEY continuously updated its users about the situation in France and flood-related disruptions. The first incident reported was published on 3 January and the last on 2 February, once there was more information of the situation improving. More than 12 notifications were sent out to SAFEY users. Additionally, the team also made sure all pertinent information was relayed timely. Besides rivers level rising situation, our analysis team sent alerts with information that contained evacuation efforts of city-dwellers and the on-ground disruptions, so that travelers could take necessary steps in advance and travel safely along roads near the rivers.

For SAFEY, keeping travelers updated in such situations will always be a priority so that they can minimize the impacts from the disruptions as much as possible.

The following is a timeline of the events as well as SAFEY and media reports:

On 22 January, reports were sent out regarding a high flood risk for several parts of the country following recent heavy rains. The highest risk of significant flooding was issued for the east-central regions. In Paris, the Seine River was at elevated levels.