In mid-January 2019 a Canadian citizen was murdered by suspected militants after being kidnapped during a raid on a mine in eastern Burkina Faso. Days later the prime minister of the country stepped down along with his entire cabinet. While no reason for the move was specified the government has faced direct calls for resignations due to recent disappearances of foreign nationals. The kidnappings have occurred as the issue of militant activity has gained increased attention. While it is not confirmed who carried out the raid on the mine in Yagha province, analysts have pointed fingers at one of the Islamist militant groups that have established a strong presence in the north along the porous border to Mali.

While attacks in the country were scarce before 2015, there was a known presence of Islamist groups in the north during in the previous decade. However, these have mainly constituted support networks for militant activity in neighboring Mali during that period.

Many analysts indicate a link between the increased concern posed by militants and events that destabilized the country in recent years. In late 2014 former president Blaise Compaoré was removed from power due to a popular uprising, and parts of the security apparatus were subsequently dismantled after a failed coup in 2015. These events, according to many, led to a power vacuum that militants took advantage of. The areas where Islamist militants have taken hold is further characterized by a specific lack of state control. Authorities and security forces have largely failed to extend effective control to the northern, and to some extent eastern regions.

Islamist groups in the region

The jihadist groups that are most predominant in Burkina Faso are primarily factions that have been involved in insurgent activity in Mali.

AQIM (Al-Qaeda in the Islamic Maghreb) is a branch of Al Qaeda that is mostly active in Algeria and Mali. In the case of Burkina Faso they are most notable as the perpetrators of one of the largest terrorist attacks on record in Burkina Faso in the form of coordinated attacks on a restaurant and two hotels in Ouagadougou in January 2016.

The group called JNIM (Jama’a Nusrat ul-Islam wa al-Muslimin) was formed through a merger of several previous groups, including the Sahara branch of AQIM in March 2017. On 2 March 2018 the group conducted simultaneous attacks on the military headquarters and the French embassy in Ouagadougou.

Unlike the previous two, the third main group active in the country (called Ansarul Islam) is predominantly locally based in the Burkina Faso. Started in 2016 it has carried out dozens of attacks, mainly targeting security forces in the north.

During a raid on a mining site on 15 January 2019, a Canadian geologist was captured. The following day his remains were found about 100 km from the mine after an apparent execution.

In September of 2018 several workers at a different mine, including two foreigners, were taken and several police officers were killed in a related militant attack. Two Australian travelers were kidnapped near the border to Mali in January 2016, at the same time as the January 2016 attacks in the capital.

The problem of kidnappings of foreigners by militants is a regional issue and not limited to Burkina Faso. An Italian priest was kidnapped in Niger not far from the border to Burkina Faso in September 2018. The militant group AQIM is known to have focused on kidnapping for ransom as a means of funding their operations.

A survey of SAFEY incident reporting on attacks suspected to be linked to Islamist militancy in the country from August 2015 to present date indicate a clear trend of increased militant activity.

In 2015 only a few cases of attacks were reported. The following year the number increased modestly, although a major attack occurred in January when militants took hostages during assaults on a restaurant and two hotels in Ouagadougou.

The year after the number of incidents nearly doubled, however the main surge in the rate of attacks recorded has occurred since June of 2018.

The survey indicate that the majority of attacks target military and police forces and posts. Most attacks take place in the northern regions, of which the most affected is Soum province in the Sahel reserve. A notable shift was found for late 2018 when incidents increasingly occur in eastern parts of Burkina Faso close to the borders to Niger and Benin. However, the review has shown that attacks have also occasionally occurred near the borders in the northwest and south as well. 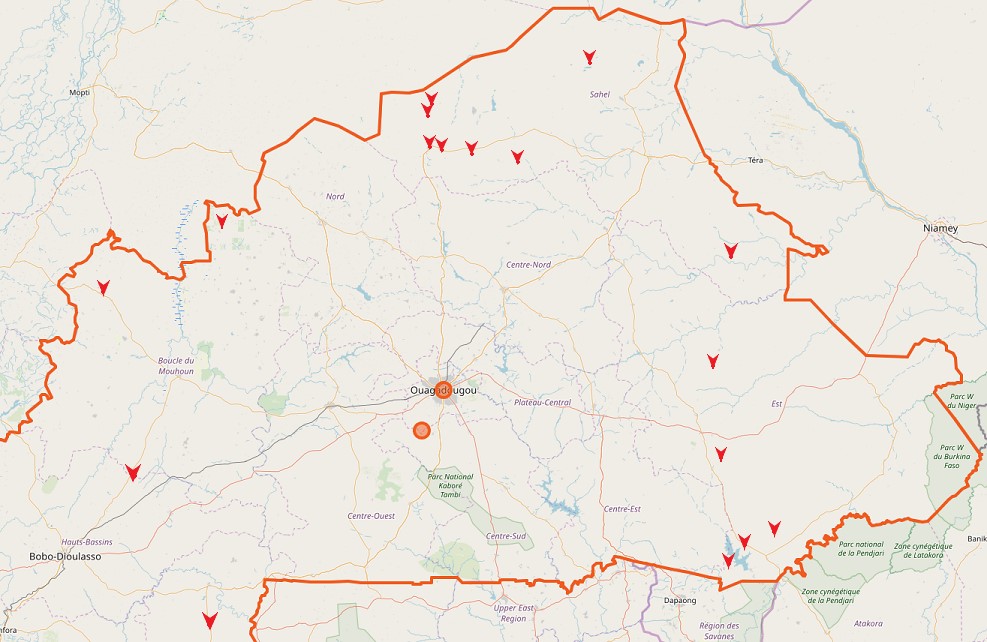 Map based on random selection of incidents from the SAFEY database

Kidnapping is likely to continue being a lucrative method for insurgent groups. The speed with which militant groups seem to have increased their activities in the eastern regions raises the question if further expansion could occur in the near future. This development constitutes a major challenge to the state. If the state security and intelligence apparatus remains hobbled from the dismantling of certain branches following the coup, the risk of militants further increasing their reach may be exacerbated. The spread of attacks along Burkina Faso’s borders also indicate that militants have considerable freedom of movement along the porous borders in the region.