On 8th August 2017, Kenyans held an election that caught global attention amid lingering memories of the 2007 poll violence that left hundreds of people dead.

The tension was high in the run-up to the election with tight competition between incumbent president Uhuru Kenyatta and his strongest opposition Raila Odinga. Although the election was hailed as “free and fair” by international observers, there was still violence across the main cities of the country in the days that followed, with Odinga claiming that the results had been manipulated. Odinga has also insisted on challenging the election results in court and also condemned the heavy-handed tactics of the police.

As the election results were announced, violence erupted at mostly low-income residential areas as well as opposition strongholds including Kisumu. At least 24 deaths were reported with much more people injured as security forces launched major crackdowns in the days that followed.

Kenya has been showing progress in its democratic transition in recent years, most notably in the devolution of power to local government to prevent rampant corruption that has dogged the country for years. However, one of the biggest challenges that continue to shape the country’s politics is the long-standing ethnic divide. 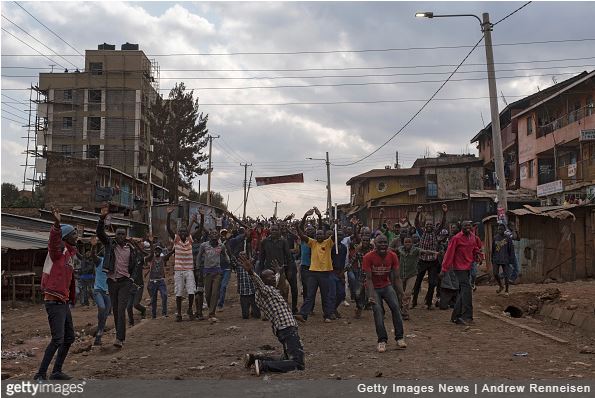 Tribal politics remain deeply ingrained in Kenya, and this tends to be more evident during national elections. Despite this, there have also been signs that the younger generation is shunning from this type of politics, something that current politicians have failed to address. According to most Kenyan youths’ the only tribes in Kenya are the “rich and poor”, and it is their belief that most of the post-election unrest in the country is due to the high-income inequality among Kenyans.

During the Kenyan election, SAFEY kept its clients informed about the political situation, by ensuring that updates were sent out for SAFEY users.  The updates contained the exact locations where violence had been reported such as in Kisumu and Kibera. Updates on transport disruptions caused by the suspension of Nairobi-Mombasa rail services as well as steps to be taken in ensuring one’s safety and security. Additionally, updates on the number of deaths caused by election-related violence in the country were also included.

In light of the current situation, many foreign governments have revised their travel advisories for those who plan to visit Kenya. The countries that issued such warning include the United States, United Kingdom, Russia and Australia. Likewise, SAFEY maintains a medium risk outlook for Kenya.