Certain areas of the Philippines have remained dangerous for foreign visitors due to a high risk of crime and sectarian violence, especially western Mindanao and the Sulu archipelago.

During the violence following the war on drugs there has been an increased threat towards foreign citizens throughout the entire country. In November 2016 there were multiple kidnappings of tourists and foreign visitors, and several countries foreign offices are advising a high degree of caution when travelling through the country.

There have been almost 6,000 reported deaths across the Philippines as a result of drug-related violence since 1 July. More than 2,000 of the casualties were reported during official police operations, the rest during vigilante and extrajudicial killings. Violence from and against drug gangs has increased under the president Rodrigo Duterte, who has made the drug war one of the main issues of his Government. Duterte has vowed to remove the drug gangs and stop drug trafficking within six months since taking office on 30 June. 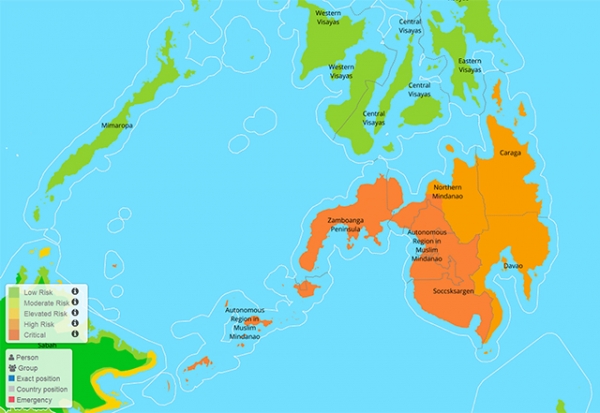 Duterte’s war on drugs has been criticized by groups such as Human Rights Watch for creating violent death squads carrying out extrajudicial killings on people with little or no connection to drug trafficking. Despite this, Duterte and his Government has vowed to continue the violent approach towards drug gangs throughout his six-year term. He has been cited as claiming that the issue of drugs within the Philippines was bigger than he first anticipated.

SAFEY provides pre-departure information to help travelers make an informed decision about where to travel in the Philippines.

In-app, SAFEY’s analyst team have compiled risk assessments for civil unrest, crime, kidnap and terrorism risks, as well as many other factors that could affect travelers.

Push notifications and SMS alerts are sent to travelers in the Philippines for weather, militant clashes, traffic disruptions, among other incidents. Currently there is a medium risk level for traveling to the Philippines.