Brazil just went through the second round of its latest presidential elections on Sunday, 28 October. Jair Bolsonaro, a far-right candidate from the small and conservative Social Liberal Party (PSL), came out as the winner with 55,13% of the overall votes against Fernando Haddad, former São Paulo mayor and education ministerfrom the Worker’s Party (PT), who received 44,87% of the votes.

Though Mr Bolsonaro has made numerous big promises for his government, he offered little details. In general, the presidential election campaign revolved around two main topics: intolerance to corruption and combating violence. Haddad’s Party (PT), which ran Brazil for 13 of the last 15 years and was ousted from power in 2016 amid a deep recession and political scandal, has been the most publicized target of the anti-corruption operation “Car Wash”, and its main leader, former Brazilian President Lula, is currently imprisoned under passive corruption charges. Bolsonaro’s rise was thus propelled by the rejection of the leftist PT and his campaign succeeded in light of his corruption battling opponents, focusing its main marketing tools on selling the idea that he would be the anti-PT president.

Mr. Bolsonaro also campaigned around the topics of violence and crime. With soaring 60.000 homicides a year, criminality is a major concern for Brazilians, not only during electoral periods. Throughout his political career, the former army captain has consistently voiced a militarized discourse, especially when promoting his visions and proposals regarding public security. A self-entitled admirer of the military dictatorship in Brazil (1964-1985), Bolsonaro claims to champion a zero-tolerance policy against criminals and defends chemical castration for rapists. He is also a strong proponent of permitting wider gun ownership, lowering the age of criminal responsibility to 16 and giving police legal ground to conduct executions while on duty. In 2017, official numbers accounted for more than 5.100 deaths during police actions, even without the proposed flexibilization of the laws. Bolsonaro has stated that a “policeman who does not kill is not a policeman” which can be interpreted as a foresight of what his concrete actions towards criminality will be once he takes office. 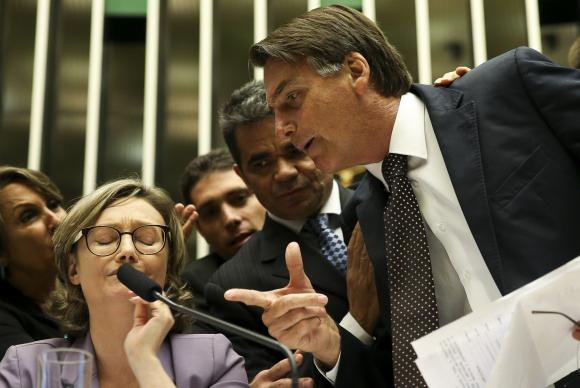 Besides being a populist and an authoritarian leader, the President-elect also holds a history of sexist, racist and homophobic commentaries and has repeatedly advocated the use of torture, as well as threatened to destroy, jail or drive into exile his political opponents. These statements have drawn serious concerns that his administration will be marked by an illiberal setback of norms, practices and human rights.

During the entire electoral process, Brazil faced the eruption of multiple opposition movements against the candidacy of Jair Bolsonaro, such as the so-called “Not Him” campaign started mainly by women, in addition to the breakout of large-scale demonstrations in the major urban centers across the country. On 29 September, SAFEY reported nationwide protests organized by The United Women Against Bolsonaro group, as well as gatherings on 10, 18, 20 and 24 October following the first round of the elections, and later on 30 October, succeeding the outcome of the voting process.

In the face of what is expected to be a time of uncertainty and stiff resistance, the future perspective for the security situation in Brazil under Mr. Bolsonaro’s administration can be summarized in increased security measures and military operations, especially in big cities such as São Paulo and Rio de Janeiro. As a consequence, political instability and subsequent civil unrest may well arise in the coming months.